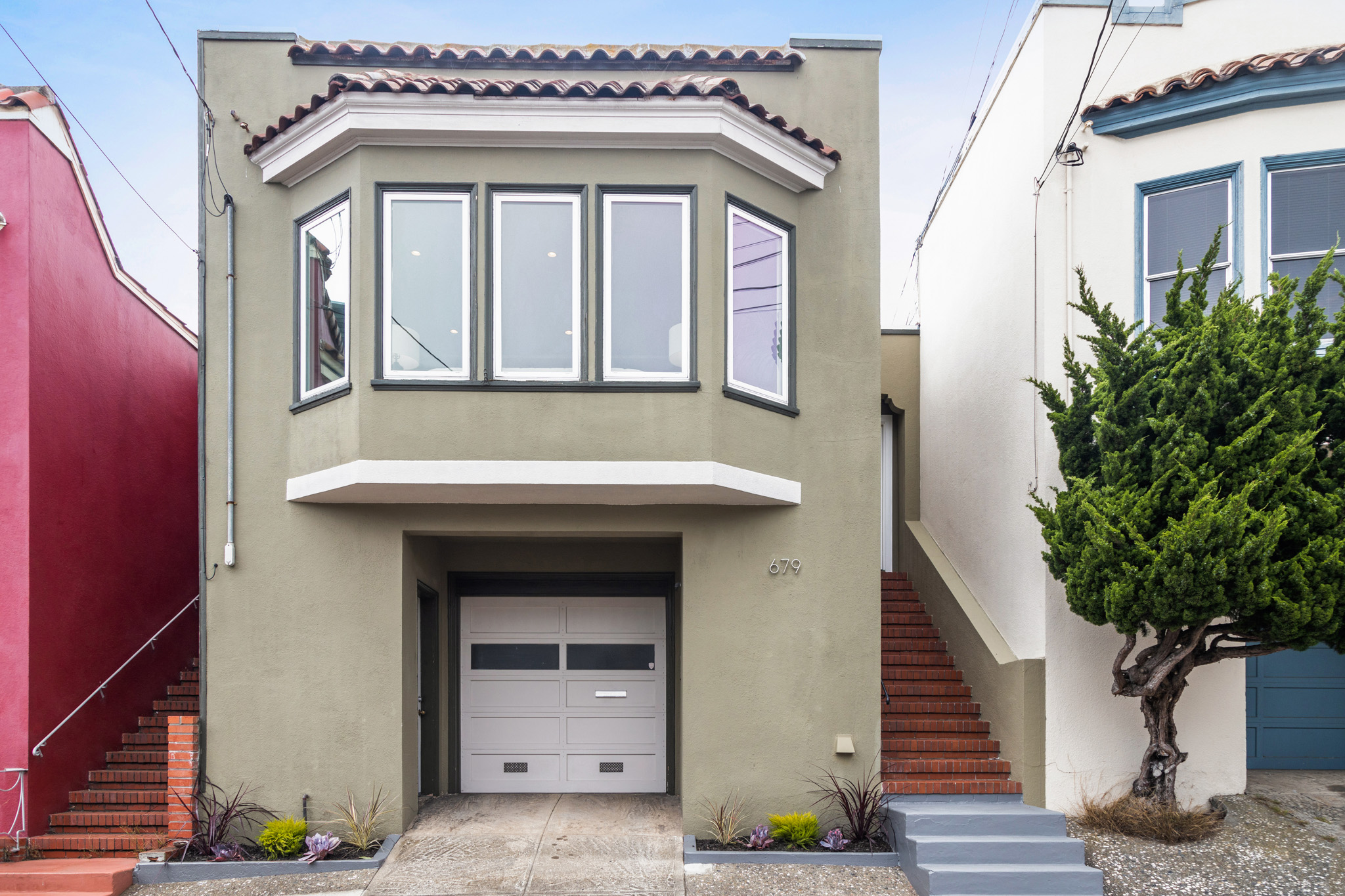 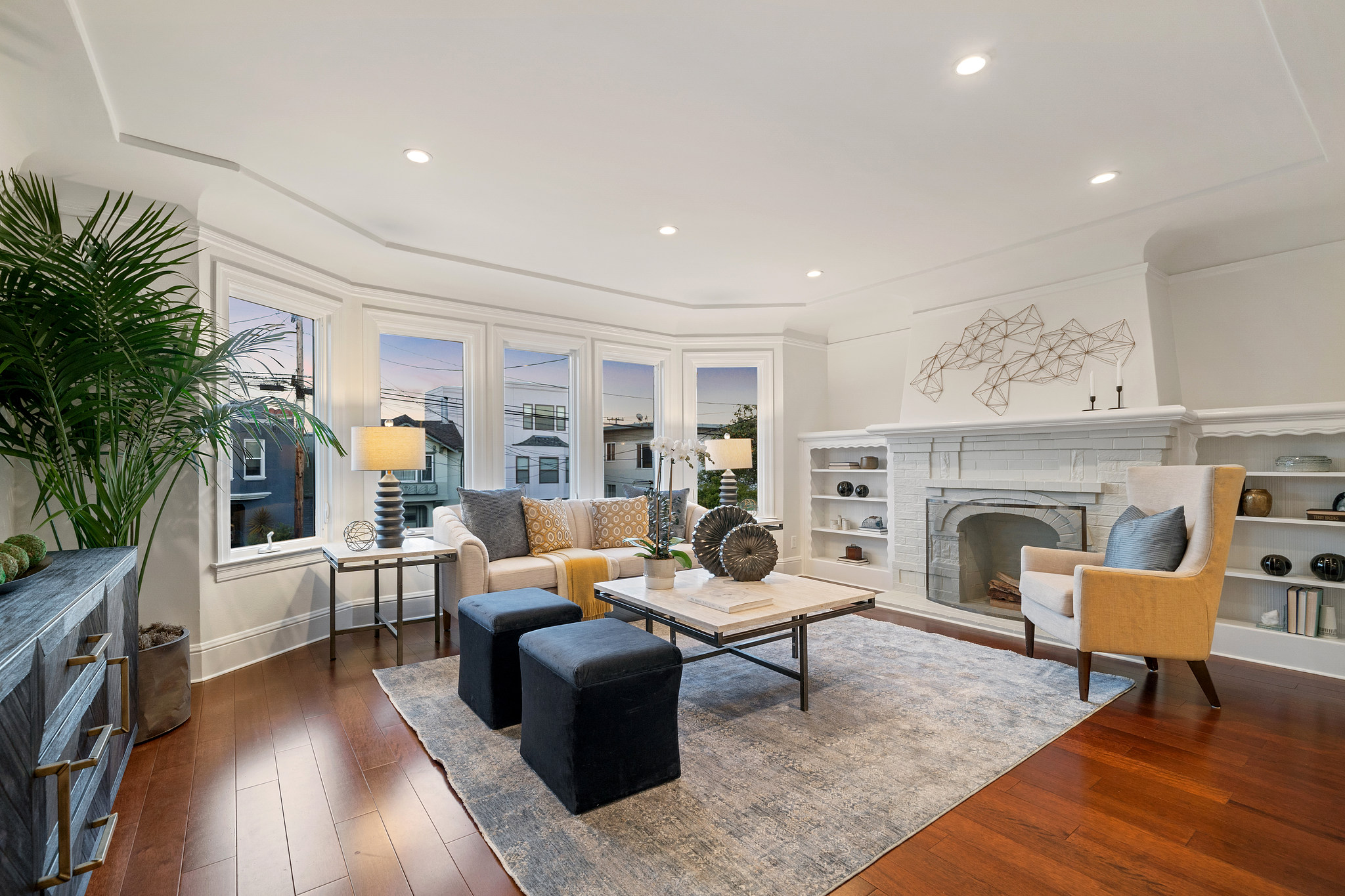 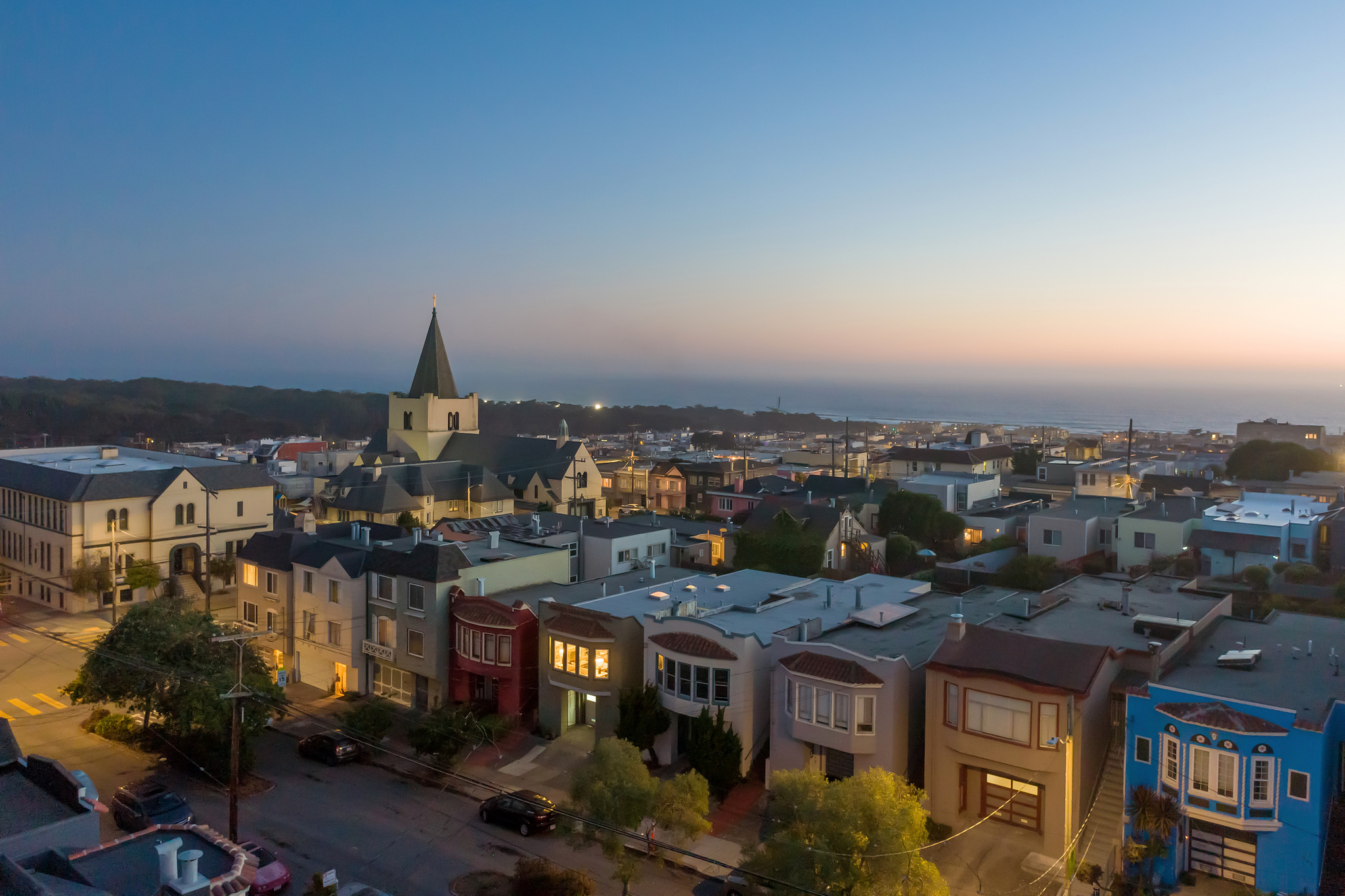 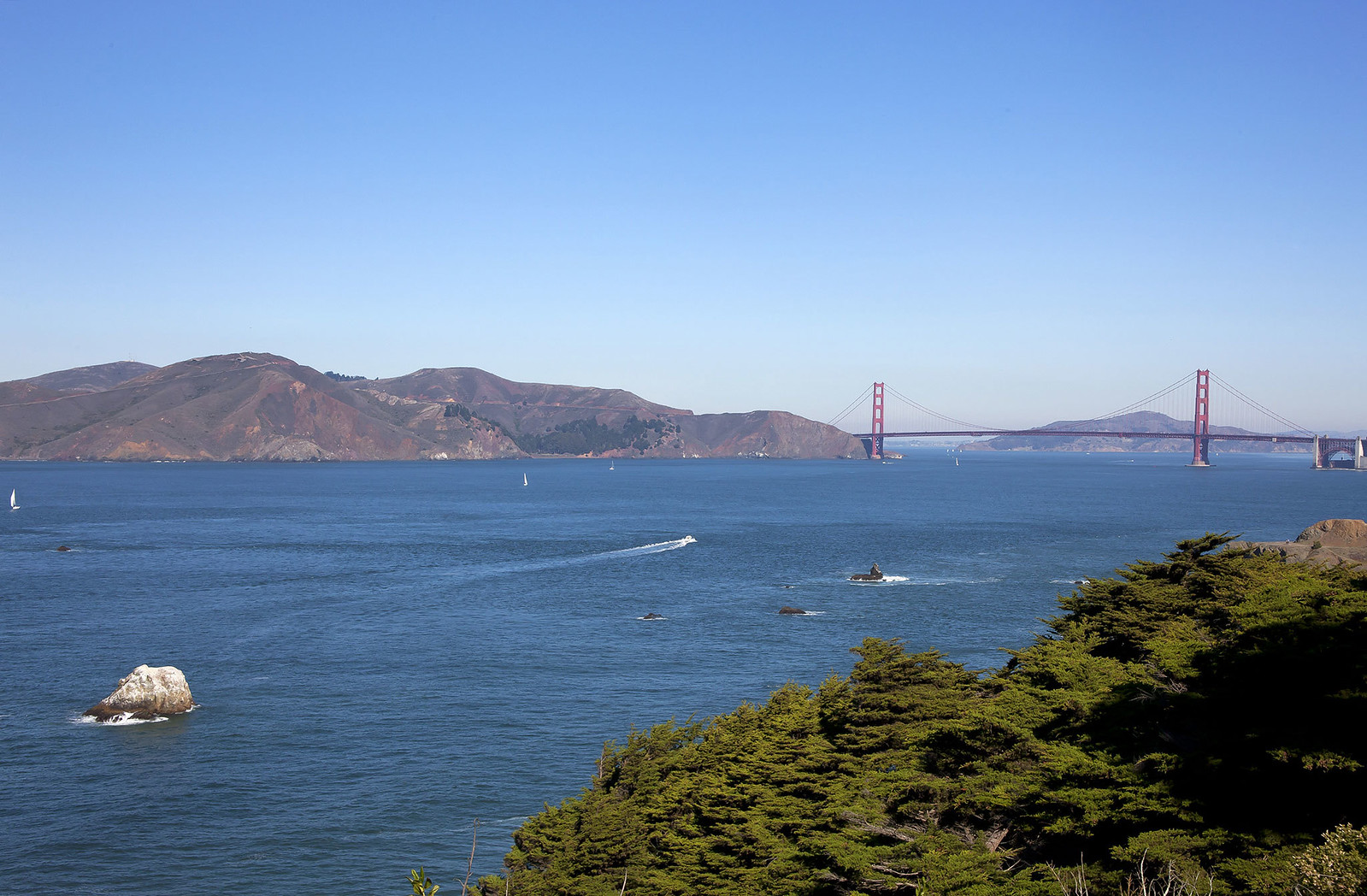 Bright, main level has three bedrooms, including a gorgeous master, and a bedroom with a private deck and stairway leading to the flat, fenced, grassy yard big enough for a bounce house! Situated in the serene Richmond District, known for excellent schools, this home is just blocks away from neighborhood shops, playgrounds and restaurants, Golden Gate Park, Land’s End, Lincoln Park Golf Course, the Legion of Honor, and Ocean Beach!

In 1923, as San Francisco boomed with prosperity in the decade following World War I, the Outer Richmond neighborhood blossomed with charming, single family homes unveiling the character and fine details that have come to define the architectural style of this idyllic suburban district.  In continuity with the well-maintained homes on this block, the designers incorporated iconic Mediterranean Revival details that are unique to this residence. A notable rarity, this block of 39th Avenue is punctuated with quaint planter road medians featuring mature foliage, adding touch of grandeur without obstructing access to this home.

The house at 679 39th Avenue was built by the B. Getz Corporation and offered the latest in modern amenities and styling. With a main office on Market Street as well as branch offices in the Inner and Outer Sunset District, this family business is credited with driving significant development of the City during this pivotal period.

Upon completion of the house in June 1923, the Getz Corporation sold the property to its first owners John. N. and Gertrude B. Raymond. John Raymond was the treasurer of an imports company. The Raymonds also bought the house to the south and it appears that they made the purchase as an investment, likely renting the houses out, and lived elsewhere in the neighborhood. In 1929, the Raymonds sold the property to Nathan and Olive N. Danziger. Census records show that in 1930, Nathan Danziger was 30 years old, having been born in California in 1899 to Russian and Austrian parents. He worked as a sales manager at a bakery. His wife, Olive, was 29 and also born in California. She was a homemaker. Ten years later, Nathan remained a sales manager, but had changed jobs and worked for an advertising company. The Danzigers owned the house for 28 years, then sold it to Judith E. Palmgren and Judith A. Elfstrom in 1956. Judith Palmgren was a 75 year old widow and Judith Elfstrom was her daughter, who worked as a telephone operator. Judith Elfstrom appears to have later married, or remarried, becoming Judith A. Elfstrom Martire. When her mother died in 1964, she assumed full ownership of the property and continued to live in the house at least into the 1990s. In 2013, the property was sold to Yushin Property Management, LLC, which within a year, sold it to the current owners.

The house presents a facade organization distinctive to suburban San Franciscan houses of the time, characterized by a basement level garage topped by a bay window, entry stairs and a small porch tucked up a flight of steps to one side, and a decorative roofline treatment. The house embodies the Mediterranean Revival style in its stucco cladding and red clay tile roof.  The garage entrance has a square opening and paneled roll-up door for one car, originally designed to fit a period automobile, imagine a Ford Model T. A tradesman's entrance is located on the left side wall of the recessed garage vestibule, giving household servants and handymen access to the utilitarian portions of the property – the garage, basement, and rear yard – without going through the formal front entry. That entry, intended for family and guests, was located at the top of a set of brick steps, flanked by a stuccoed cheek wall. The partially-glazed, paneled entry door is sheltered within a vestibule with a decorative shouldered arch opening. The bay window on the left side of the primary facade is shallow and faceted, and is fenestrated with five tall, narrow, single-lite windows with molded trim and sills. The bay window has a band of defining trim at its base and is capped by a red clay tile hip roof with a heavy molding and wide fascia at the eave line. The facade, itself, is crowned by a clay tile pent roof, with low coped parapet tabs on either side.

If you are looking for a beautiful neighborhood in San Francisco surrounded by the most popular parks in the Bay Area, the Outer Richmond District is a great place to call home. The community is filled with gorgeous row houses that hug the sloped streets of the Richmond District. With its variety of ethnically diverse communities throughout the neighborhood, living in the Richmond District is a true cultural experience. While the westernmost park of Geary Road can be heavily trafficked, there are plenty of great restaurants and shops to explore on nearby Balboa Street. Enjoy your morning coffee along with a tasty breakfast sandwich at the highly-rated La Promenade Cafe, or stop by the long-standing Simple Pleasures Cafe if you’re craving a bagel or muffin. The Outer Richmond neighborhood is a great place to explore a variety of cuisines around the world, including the Al-Masri Egyptian Restaurant and the local Vietnamese favorite Mr. Banh Mi. One of the best features of the Outer Richmond District is it’s within walking distance of Golden Gate Park. The park is home to a wide variety of different activities and festivals, including a free bluegrass festival, as well as the Outside Lands Music Festival. Golden Gate park also features several bike and jogging paths, botanical and Japanese gardens, and since the park is closed to car traffic on Sundays, it provides a peaceful escape from the constant bustle of San Francisco. The Outer Richmond District is also just a mile away from the scenic Ocean Beach. Known for its high winds and strong currents, Ocean Beach is perfect for surfing, biking along the coast, or simply hanging out. Plus, the beach is dog-friendly and as long as your pooch is well-trained, they can enjoy the beach off leash! Outer Richmond District residents can explore one of the Bay Area’s most popular tourist attractions found at Sutro Baths which originally began as a bathhouse in the late 19th Century.